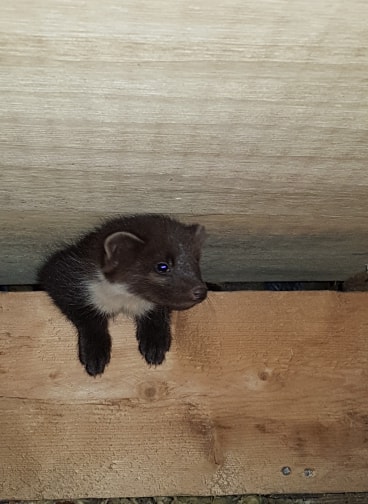 When our technicians are called out to investigate noises in a loft, they would usually expect to find signs of rat or mice activity or perhaps even a squirrel or bird. They very rarely come face to face with the culprit.

So, when Colin climbed into a loft on a call out, he didn’t expect to hear let alone see anything.

But then, neither did the Pine Marten he came face to face with!

This cuddly looking creature is a member of the weasel family and usually lives in woodlands and rocky hillsides. It’s a good climber and will live in tree holes, old squirrel dreys and even old birds’ nests. With fierce teeth and claws, it feeds on small rodents, birds, eggs, insects and fruit and is occasionally seen visiting bird tables groaning with nuts and raisins. During the summer mating season, they make shrill, cat-like-calls. The following spring, the female will have a litter of one to five kits, which are fully fledged by the Autumn.

Once found across the whole of Britain, the number of pine martens decreased dramatically during the 19th centuries, largely the result of the efforts of gamekeepers on sporting estates.  In England and Wales, numbers are fragmented, whilst in Scotland, traces of these elusive animals can mainly be found north of the central belt with an estimated adult population of 4,000. The species, itself, was given full legal protection in 1988.

With a distinctive large creamy-white patch across their throat, and a bushy tail, these cat sized animals aren’t confined to woodlands and have several temporary resting places (dens) in their territory. As a result of the scarcity of natural den sites, pine martens may use both inhabited and uninhabited buildings as dens. This is most common when a breeding female may use the roof-space of a building to give birth to her young (‘kits’). If this takes place, kits may be present from March to July, with most births taking place in early April. Problems with martens are most acute when breeding is taking place. Initially, there may be very little evidence, but as the young grow and become mobile, they can be very noisy throughout the night.

It is an offence to disturb or block access to a pine marten’s ‘den’ although this doesn’t apply in the case of dwelling homes. In such cases, Scottish Natural Heritage can advise on the best options, which include installing special breeding boxes on nearby trees to provide an alternative.

Pine martens may also get into chicken coops and pheasant release boxes and where they are causing significant damage to livestock, Scottish Natural Heritage may license their control.

Given the massive historic reduction in the range of species, there’s still great potential for the marten to recolonise areas it formerly occupied. However, whilst pine martens are thrilling animals to see, better they are your neighbours than house guests!