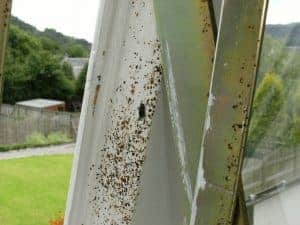 They cluster. They fly. They are Cluster Flies.

And if you’ve ever opened a window or popped your head into a loft, you’ll know all about them. They can swarm around you and it’s like starring in your very own horror movie.

The Cluster Fly is the one insect that can really get up your nose and the recent spell of unseasonably warm weather is just the thing to rouse them from their slumbers. These flies have the habit of coming indoors in late autumn to shelter during the cold winter months. Like all insects, they don’t hibernate like mammals, but enter a state called diapause which slows down their development and appetite until temperatures rise and they become active again.

They are usually found in areas with lots of grass land, parks and grazing pastures. They lay their eggs in the soil, hatching in a week. The larvae then bore inside earthworms and stay throughout the winter. In spring, they develop quickly and pupate in the surrounding soil. The adult flies finally emerge in summer.

During the summer, they live outdoors and can often be seen sunning themselves on fences, walls and tree trunks. In the autumn, with houses close to open spaces and fields, it is quite common for these flies to congregate in large numbers on the outside of buildings, especially on the sunny south-east facing light coloured walls. As the afternoon temperature falls, they tend to crawl into crevices for shelter, sometimes through window frames, but mainly under the eaves / fascia boards into the roof space. During subsequent days they may emerge and sun themselves but as autumn moves on and temperatures fall, they finally remain inside until the process is reversed in the spring.

Although the appearance of these lethargic flies causes considerable annoyance, they are quite harmless. Cluster Flies don’t carry disease but they are an unsightly nuisance and large clusters can create a very unpleasant smell. Do they cause damage? No, but they can create a mess. They like to enter window frames where they leave significant deposits together with an offensive, sickly smell. Cluster flies also like to gather in the warmth and shelter of lofts and then are often seen for the first time when people go to collect the Christmas decorations and holiday suitcases. They are attracted to a light source which means that large numbers can collect around the light fittings and potentially cause a fire risk.

We know why cluster flies seek to shelter in this way, though we don’t know why they enter certain buildings in preference to other nearby properties. However, once a building has been invaded, it is almost certain that more flies will return in subsequent years.