As the warmer weather arrives, so do more pests…

Avoid a Sting in the Tail – Wasps (Vespula Vulgaris)

They buzz. They are striped. They are very conspicuous. And they are one of the most feared and aggressive pests. They have a sweet tooth at one end and a painful sting at the other. It is, of course, the wasp. 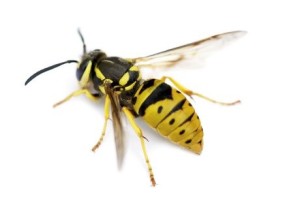 Active in the summer, they are social insects and form large highly organised colonies. The queen hibernates in the winter and emerges in the spring looking for a suitable nesting site. She will build a nest in absolutely any sheltered areas, indoors or out, where she feels safe and secure – eaves, wall spaces, attics. A nest itself is made up from chewed wood and saliva and a mature nest found in the late summer months can contain thousands of wasps.

In the early part of the season wasps are unlikely to attack and sting unless they feel threatened. They are on a mission to build the nest and feed the larvae inside. The end of the summer is a different story.

So, what purpose do wasps actually serve?  Well, in the early summer, they play an important role in the pollination of plants and flowers as they feed on the nectar. They also spend a lot of time hunting and catching small insects. The insect prey is chewed up and fed to the larvae in the nest. The larvae turn the exoskeleton of the dead insect into a sugary solution which is then fed back to the adult wasp, almost like a ‘red bull’ reward for all the hard work the wasps do. By the end of the summer all the larvae have changed into adult wasps – and consequently no more ‘red bull’. The wasps are also no longer required to build the nest or feed larvae so now qualify for some well- deserved R and R. And that’s when the problems start.

Demob happy, wasps are more likely to be attracted to sugary food and drinks. And even more likely to attack and sting without being provoked. So, if you are experiencing huge numbers of wasps in your house or garden there is likely to be a nest nearby.